Evel Knievel may still be the most famous motorcyclists on the planet. Thanks to his big crashes and huge-selling 1970s Evel Knievel Stuntcycle toy! When he jumped, he rode a Harley-Davidson XR750, just like this one here. In fact, it may have even been this one, as it was tuned by the shop that tuned Evel’s bikes. To see how much of a hero Evel was, a riding session with a top UK freestyle rider was arranged. He’d jump his own bike, then try to jump the Knievel bike.

But slick tyres, a pebbly surface and a very expensive old-school bike that weighs an incredible amount doesn’t make for very spectacular leaps. So it’s official, Evel was a true hero. Or total nutter. Same thing. 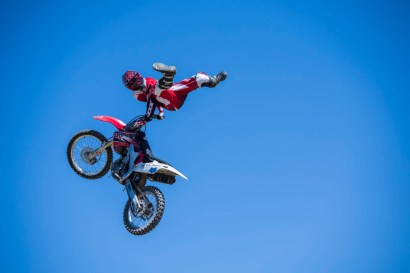 Take the old one? No thanks…

Styling with the Evel machine!

Sunshine and a classic Harley. Sweet